This window, started out as a not-very-well-planned idea, and changed a LOT as it went along. In March, I went to Truckee and showed one of the Lake Tahoe windows to a couple stores, and one of the stores said"we would like to put some of your glass-works for sale in our store. Why not bring us three or four in May sometime along with some labels and we'll see what happens." I thought that at least one of the Lake Tahoe quartet would be a good start, and that I should make one of Donner or Tahoe, one of a fisherman, and one that was made specifically for the store to keep on display. So I laid out a pattern, cut all the glass and one layer of clear which I would paint all the trees and mountains on. I also painted the name of the store in the sky and fired everything in the kiln. 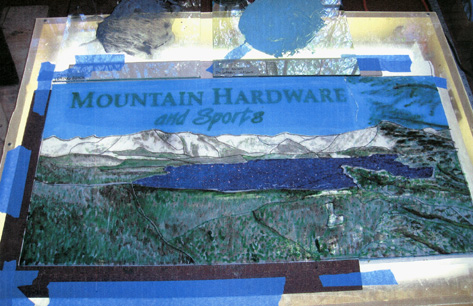 However, when it was all fired and reassembled, it did not look like I had hoped. It would require several more applications of paint, and re-firing, and plating of the glass (which I had intended on anyway.) So, I decided to contemplate it for a few days, and start on another project simultaneously, two identical windows of a fly-fisherman in the Truckee River.(more on that in a minute). As the days went by, I just didn't like the painting of the trees, so I went to find some different glass. I also didn't like the break in the sky to the right of the title, where the tree had been painted. So, I went to two glass shops and got new sky and new foreground. I took out all the trees and painted glass and rebuilt the window using new glass. The result was also not what I anticipated. However, it is a Lake Tahoe scene, and so I think someone will like it if it isn't too expensive. 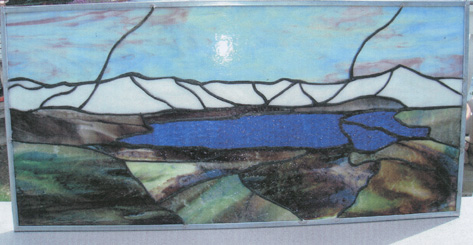 While I was in the process of contemplating the Tahoe-scape window above, I laid out two identical fly-fisherman windows. For these panels, I chose some unusual colors and decided to not only paint the fish and plate them for depth, but as I was laying them out, it struck me that a couple years earlier, I had purchased a keychain in a fishing store, that had a small scaled-down, but fully functional fly reel on it. I thought, "why not make two miniture bamboo fly rods and have the fisherman holding it and catching the fish with a fly?" So, that's what I did! In the picture below, you see both window, one showing the front, one turned around showing the reverse. You can see the painted front of the fish and the green plated back of the fish, and, the fly rods extending out as 3-D additions to the surface of the glass, including fly-line and a fly used in the Truckee River.

I decided NOT to paint any of the pieces except the fish, until I see one or both of them sell. If there is a demand for the design, I can paint the face, clothing features and splashing of the water on the waders and fish for the next windows. For the fly rods, I used fine dowls of bamboo and made small eyelets for the line to travel through. The tippets (tips) were made with tiny copper tubing and an stainless eleylet, then the reel and all the eyelets were shrink-sealed onto the bamboo and tied with black and red thread, then seal-coated with laquer. The rod and the line in his hand, and the line(s) at the bottom and the fly in the fish's mouth, are secured with tiny copper wires, and the fly line, leader and fly are just what one would use in the Truckee River. If the line ever ages, and/or breaks, it is easy to replace. This is how the fly rod came out. 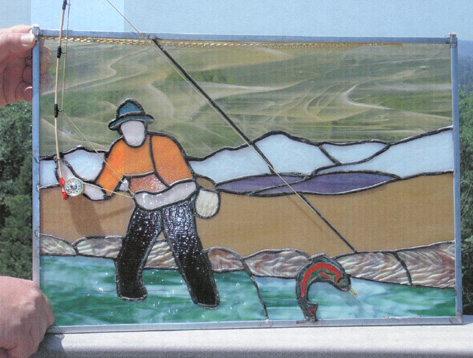 A mentioned above, the Tahoe-scape One" window, was originally supposed to be for the store in Truckee, which is why I made the painted sky for it. However, as we saw, it didn't end up being used. Instead, I cut the title piece shorter and laid it out with an image of Donner Lake instead of Tahoe. This time, instead of painting anything, I chose particularly grainy glass for the water, trees and rocks, then chose very obviously grainy and textured snow, mountains, foothills and roadway (old Highway 40 and it's bridge). The window is copper foil construction, and the bridge is built from thin-heart came wrapping across the whole window along the highway, and then the green trees will be plated behind the bridge, so it will be three-dimensional with the bridge standing out on the surface of the window. This design and choice of glass should be quite striking in both transmitted and reflected light, and at many times of day from dawn to dusk. I was quite happy how it turned out. I might consider going to some big toy store and finding a tiny car to put on the roadway :) It will look better when it is plated and patinaed. 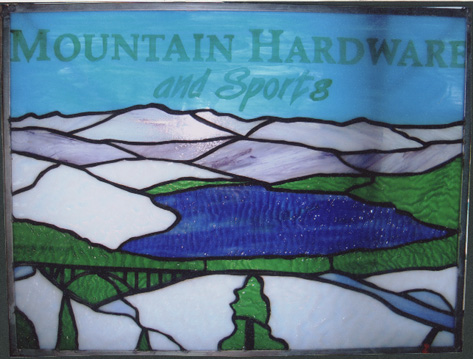 So, that is it for the first half of the year. For the second half of the year, I have several figurals utilizing glass-painting lined up and ready to go. I have about 8-9 windows to try and finish by December, including a couple Indian images, a couple classical "drapery/robed" pieces, and a few surprises. Just for fun, I will keep this running diary of my exploits going as the months progress. -- Pat