2008 started with a fun project. Last year when I went to Portland to study with Raphael Schnepf, we took some time to go to Uroboros Glass Studios, where I was treated to going through their glass library in the factory, and pick out some glass for myself. This is unusual because you have to have a reseller's number to buy from them wholesale, meaning they don't sell to the public. Luckily, I have a friend in the glass business who let's me use her seller's number, so I was able to buy some glass and take it with me, and pay my friend later. The nice folks at Uroboros also invited us to a Visiting Artist Reception the next night and we both had a great time. As I went through their discontinued sheets, I was also contemplating the question... "what will I use THIS piece for?" on every sheet i pulled out. And, in a library like theirs, this question is repeated a hundred times. But, it struck me that I should make a a nice window for the company, using only their discontinued glass, something they might hang in the plant somewhere for the employees to enjoy. I found some nice textured blue, and some bright orange "flames" glass, and grabbed a brochure that had their company logo on it. They also had some red glass which they had made that day, and the end pieces were heading out to the recycle bin. They let me take a handful with me. Over the next several months I sort-of drafted a design in my head, and when my other projects were completed, I set out to make Uroboros a window.

First, I took their logo and enlarged it. Then I "googled" the word "Uroburos" and found some great references. One of the dictonaries I use had the word with it's latin spelling, so I copied that and started working on the simultaneous design and construction on my light table. The first step was to take two clear pieces of glass and mask them with a stencil, made from airbrush-frisket paper. Then I airbrushed the titles several layers thick, and then removed the frisket and fired them together. Next I had to go buy a piece of yellow Uroboros glass (not discontinued) and some supplies. Once the titles were done, I laid out and cut the rest of the glass and copper-foiled it up. Now this sounds easy enough, except that I actually set out to make TWO of these windows, and in different sizes... one for the owners of Uroboros, and another for their very sweet and talented employee Kat Hartley, who was the person to allow me to have fun when visiting their facilities. I decided to make a BIG panel for the offices, and a small window for Kat. This meant two of everything, and, in two sizes, including the stencils and title panels. The large one is 17x22 and the small one is 9x11. 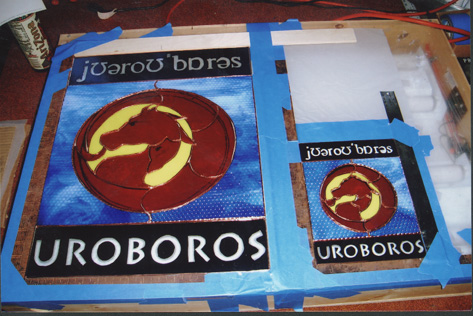 As I went along constructing these, I wondered what to do for the lettering to make it more interesting. I thought of painting the letters all different colors, but that would take a LOT of airbrushing and firings, I also had some "fire" glass (my name for it) that I wanted to use but didn't know where. (The answer became obvious later on). Then next day, I called Kat at Uroboros and another friend at Franciscan Glass in Newark, CA, and asked for any leftover samples (3"x3" samples used by retail stores) of Uro's discontinued colors they might have laying around. Both companies sent samples and I quickly had 32 - 3" x 3" samples of their out-of-date URO glass styles. The trick was, I wanted to make not just two windows and different sizes, I wanted them to be identical otherwise! I started experimenting with the samples and putting them in different orders, and tried to cut a small piece, too, and layout both windows identically. As wierd as this sounds, it worked. I was able to fill in behind all the U-R-O-B-O-R-O-S labels with the samples, and then it hit me..... The fire glass can go on top of the window, like the fire atop molton glass (the signifigance of this I'll tell you in a minute...) 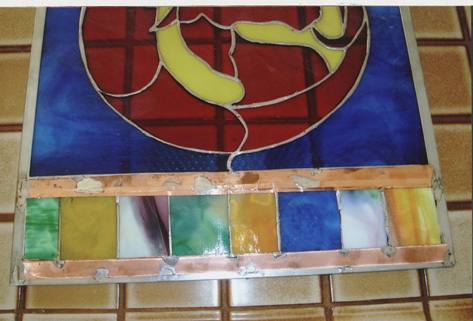 To layer or "plate" the titles, I had to complete the zinc framing of the windows and pre-patine parts of the construction, leaving other areas without patina (for later soldering of plated elements). I also had to make sure no unwanted light came through gaps in the copperwork, which would ruin the black masking when viewed from the front. Then when the construction and plating was done, I had to patina them without any patina getting on the black painted stencils. I left the copper on the back natural. The end result was something I really enjoyed seeing, as did the folks up at Uroboros, who received the windows two weeks later when I sent them to thier offices as gifts, packed in bubble wrap, newspaper and 4 inches of foam on both sides.). To accompany the windows, I prepared a caption which explained what the Uroboros means historically, and my design choices and reasons for building them, and presented it as a legacy for the windows from the artist's point of view. 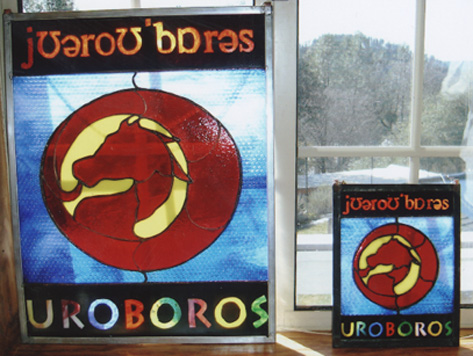 UROBOROS : "The name UROBOROS is the modern American spelling of the classical Greek word Ourorboros meaning "tail-devourer," which names an ancient symbol found in many cultures throughout the centuries, of a serpent or dragon swallowing its own tail, thus forming an infinite circle symbolizing cyclicality, unity, and infinity. The Uroboros and is an important mythological, religious and alchemical figure which represents myriad concepts including "life and death repeating;" "creation out of destruction;" "yin yang;" and "an immortal animal seen as the symbol of evolutionary renewal." Untold meanings have been assigned to this classical symbol by many global cultures from antiquity through to the present day.

In Alchemy, the Uroboros is described as the "transmutation or miraculous change from one incarnation into another" One chief aim of the Alchemist's art was turning base metals into gold (or sand and other elements into glass!) Here, the Uroboros is an archetypal mandala; a purifying seal or signet of mysterious power; "a clash of opposites;" and a "symbol of immortality." The Uroboros "slays itself and then brings it's life back to itself;" "a serpent of light residing in the heavens;" like a Phoenix rising in re-creative magic.

Glassmaking is an ancient art, dating to 4700 B.C., equal to the age of the Uroboros legend. Today, Uroboros Glass Studios, Inc. (founded in January of 1973 by Eric Lovell,) combines alchemy, chemistry, effort and artistry, to create the finest art-glass in the world. Sand, silica, rare chemicals and metal oxides; heat and human experimentation; all combine to create "artistic gold" from baser ingredients. The Uroboros logo today is world renown as a trademark of art-glass manufacturing excellence. Uroboros Glass is known as a company planted firmly in tradition, but keeps its eyes wide open toward the future, as the Uroborean cycle repeats. This modern incarnation, cleverly serves glass artists worldwide!

This stained glass panel, presents first the ancient Greek spelling lit from behind by the fires of alchemy then leads into the fiery dragon backed by the Sun and Sky in an ever-revolving creative cycle of life and art. The final blend, is a rainbow of unique creations in glass, devised, invented and repeated by the master craftsmen & artful members of the Uroboros family!

(This panel was a gift to Eric & Lorna Lovell and the whole extraordinary Uroboros family, from Pat Jacobsen's Millennium Art Glass .com in February 2008, made exclusively of Uroboros glass with appreciation & reverence for the creative work they do!!)"

Now that the projects I WANTED TO DO were all done, I decided to make something to SELL and see if I can make any money in stained glass. Being a sportsman and living not far from Lake Tahoe and Donner Lake in Northern California, I decided to do some skiing and fishing and area-related sports themes in glass and try to consign them around Truckee, located between both lakes. I thought about personalizing the images to be specific to the Tahoe-Donner region and not just generic patterns. It seemed reasonable to do something fairly uncomplicated, with good colors and some interesting design features, and then something "special" I also felt that my recent experiments with building simultaneous windows should be part of the equation, too. The design I came up with would include one of the lakes, with its name painted across the sky, and a painted fish leaping out of the lake. I made FOUR of these windows simultaneously, and in two different sizes. So first I laid out all the lakes and frames, then needed to make some fish. 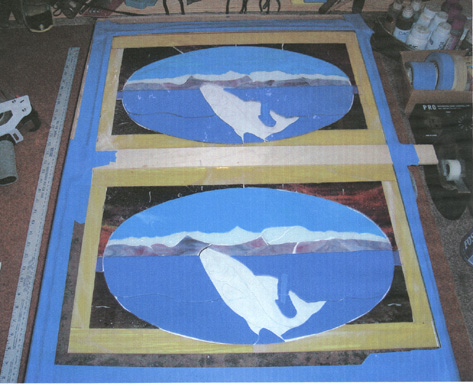 For the titles in the sky, I used the same frisket and airbrush technique as in the Uroboros window, by stenciling the letters, spraying them, and then peeling away the stencile and firing them. For the fish, I found some glass that had raised water droplets on one surface, to give the impression of wet scales. Then, I needed to flip the glass over and paint the fish in reverse on all four blanks. The painting, since it was done on the back of the glass, meant the highlights had to come first and the background colors added and fired successively. This took a few days and a few firings, but once the four fishes were done, I assembled the four windows in one process. 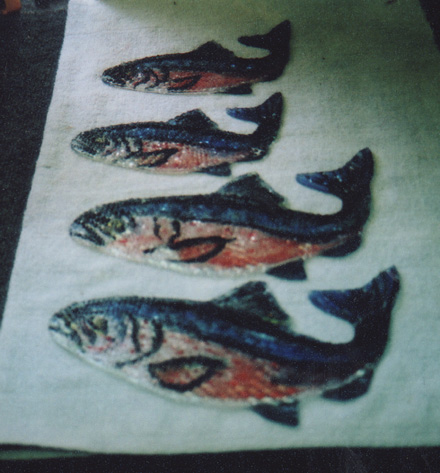 The final result was four almost identical windows that I could take out and try to sell. The last element of the window, was the "reason" the fish was leaping out of the lake in the first place. I put a small loop of copper wire in the fishes' lips, and attached an artificial -fly fishing lure to them, and a piece of fishing line up to the left upper corner. The fish, a rainbow or Lake Trout native of both Tahoe and Donner was caught on a fly-line, featuring a Stanley Streamer artificial fly, one used in the area. The whole project took about 55 hours from start to finish. I took one of these up to Truckee the next week and a store agreed to buy one of them, and two other windows, to be delivered mid-May. The other three will need to find homes, too! But, before I could deliver these to the store, I had three weeks to come up with two more designs and windows to sell! Yikes!!! 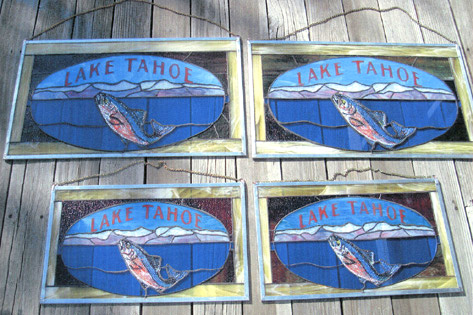