5) Continuation of the Diana-The Huntress window:

Here is the window after the painting and kiln-work was done, the whole window taped and soldered, and the spear temporarily attached. The drapery glass was tricky and interesting to copper foil. I used really wide tape then razored off the excesses. But SHOULD HAVE USED black-back tape. I used copper back, and it shows. So in the future i will use black back). I still have to patina the whole window and solder the wires onto the spear. The biggest trick was to build a padded surface of cardboard and towels onto the face of the window, to support it when it was turned over to solder the back. Since the drapery glass is 1" above the normal surface of the glass, and, since I put pennies under several glass joints to create elevations for a deliberatly uneven surface . So, when flipping the whole window over to solder the back, the uneven face had to be supported evenly before flipping. To flip it, I slid another piece of cardboard under the back, and holding everything together like a big sandwich, I flipped it all over at once. It WORKED perfectly! Here is a shot of the completed window before patina. I ended up cutting away part of the upper arm and adding more hair under the spear, instead of painting it onto the glass. I have 37 hours into this window, and 4-5 firings of various glass and color layers. The spear is brass rod with a brass blade tip ( I decided not to use stone which could break and be lost) and copper wrapping, which attached TO the window on top by a couple fine wires. This image is the pre-patina version (reflected light)

Finally, om Sunday 12/23/07 I patinaed the lead using a Q-Tip ONLY and a paper towel (actually 20 q-tips and 20 paper towels. wiping up any excess as I went. But, even so, I used one of my test pieces to see if the patina would harm the painting like it had in the Mermaids, and to my surprise, it did not! Nonetheless, i used great care in patina-ing this window, both sides, then I attached the spear. Here is how it ended up. (this image is mostly reflected light (atop the glass), NOT transmitted light (through the glass)) 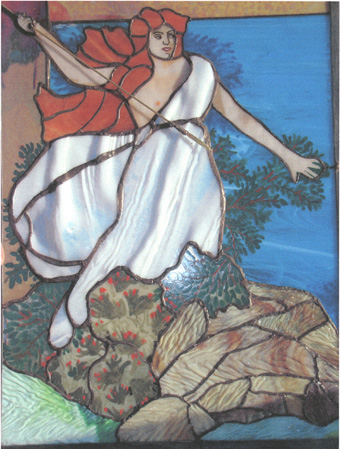 What i like is the three-dimensionality of the drapery glass, the stacked glass in the bushes, the elevations (using pennies) and the spear sitting atop everything. I stacked her hand (the one holding the spear) over clear glass so it looks like a folded hand on a plane above the window itself, and cut the spear so it looks like her hand is holding it. I also like the drama of the "blood-red" glass that changed in the kiln, around her hand. Being my first (well, second) use of drapery glass, i plan to experiment a lot more, and with bigger pieces. This window took exactly 40 hours (between November 20th and December 23rd 2007) to create. This is panel number 18 in my career since February '05, or three years of part-time work. I think I am getting the hang of it! Happy holidays everyone. In January I will start making commercial pieces to sell.... (well, hopefully :) 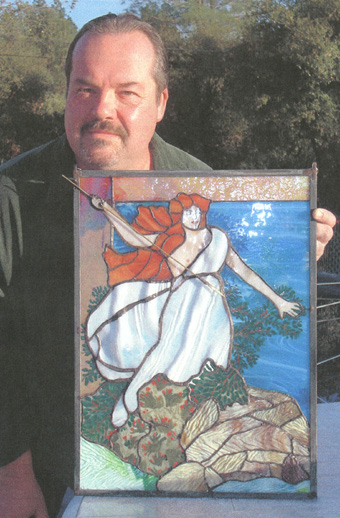 Here is the original artwork I used for the design. Painted in the 1920s by Rudolph Schmidt who gave this tom me when he was in his mid ninties back in the 1980s. I have other similar artworks which I may turn into glass one day.

Right after I finished this Diana window, I received the re-done torsos from Raphael whom I had sent them to to be re-created. Once they arrived, I put them back into their windows and pationaed them using Q-Tips and paper towels to conservatively applying the patina ONLY and DIRECTLY to the solder, and wiping the excess away immediately. Here is how they turned out, just as they were last April 1st, just a moment before my patina disaster. Time to move on to new painting projects. 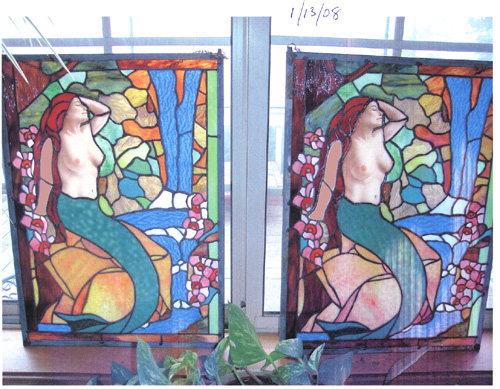 Now that the Mermaids are done, and Diana is done, I will move on to other projects. :)

This is a close-up detail of one of the torsos that raphael re-created, showing the layering of the colors. This is made up of four layers of airbrushed enamels and four firings. 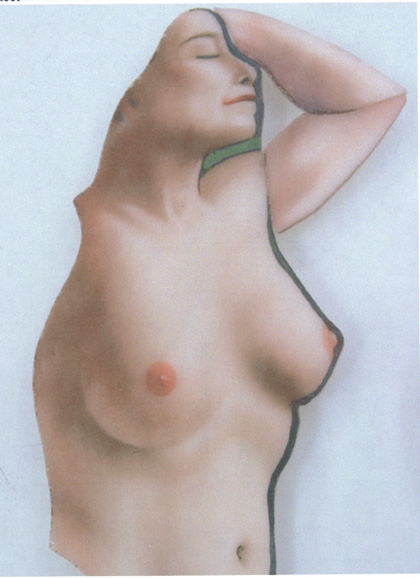 On to the next page: <Next Page>