One image of which I am particularly fond, is this one of Cupid and Psyche romancing. It comes from a famous Italian statue of the late 1700s, and has had several painted representations over the years and countless re-makes in every size of the original statue. The first version pictured below, is an 1890s cigar-box label. The more traditional image is taken from an artbook (and reversed to have the opposite orientation.) They are clearly different in several respects, not least of which is the drapery (or lack thereof) of the two figures. The painting I like is from the late 1700s by Antonio Canova. For more on this image, visit www.art.com and type in "Psyche." Several variations are shown, in several media. 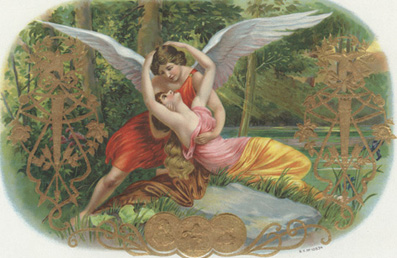 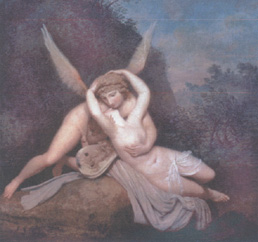 The reasons I am taking on this design, are because it demands a broad pallet of colors and textures of glass, the painting of two figures on glass, and, the use of drapery glass. It is also a large format panel, and it may reguire structural elements built into it, to support the weight of the glass in the center over time. I will, no doubt, be changing the background somewhat, and I may try plating (stacking) the painted elements behind the drapery glass where required. I may also need to find a model so I can give the Psyche character a "real" and more contemporary figure and face. It is part of my goal as an artist to reproduce the human form in my work (particularly the feminine form.) (I have a page on this site that tells more of this story...) So, windows like this are a particularly interesting challenge. 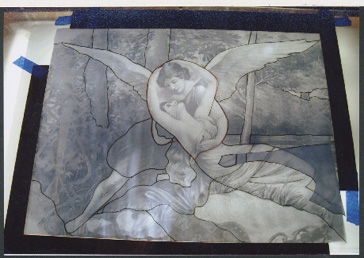 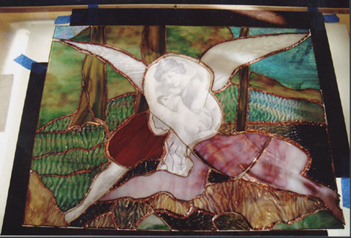 This photo is of the basic cartoon under velum, with two framing-squares taped into place to secure the glass pieces. Once I got all the pieces cut and laid out, I didn't like the lack of foliage and leaves and tree branches in the background. I ended up changing that, and decided to try some overlays later to create limbs and leaves. The image on the right shows the basic glass cut and in place and then copper-foiled for soldering. The painting will be done in my garage, then be fired in the kiln, then those pieces, the central painted panel, her hair and the leg, brought down and placed into the window for soldering. As if to make matters worse, I am making TWO of this window simultaneously on two light tables, every piece of glass is cut right next to itself from the same piece of glass. That way, the look and texture of the piece will be as close to identical as they can be, since they are cut side-by-side. Below is the second window. Next to it, is a close-up of the drapery glass and rippled glass used for her robe and the rocks. 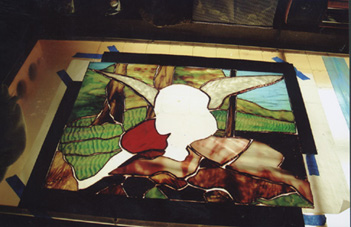 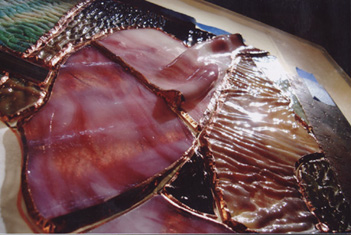 The next photo is of Cupid's wings made from heavily rippled white glass with the glass cut in such a way as to have the grain of the feathers in the wings flowing in the right direction. Finally, a picture of the pieces of glass that are to be painted. They are a warm-toned cathedral glass, three pieces, one for the main center panel of the lovers, a second of her hair, and the third is Cupid's leg. These are seen on a third light table with my airbrush. Both windows are currently ready to be soldered, but I have to wait until all the painting and kiln firings are done, so that all the pieces fit correctly, as these pieces might change size slightly after several kiln firings. 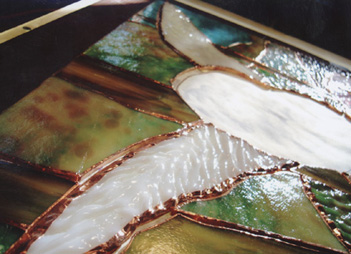 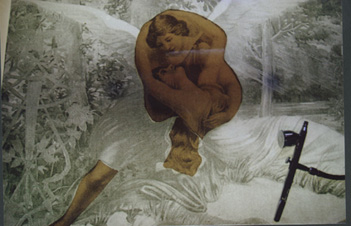 The next photo is a picture of what drapery glass looks like. It is not flat, but deliberately folded and moved when molten, and then cools into a rolling "drapery"-like contour. This photo is of several sheets of different color drapery glass. Note the gnarly texture of each different piece. On the left, the dark sheets are deep purple and green glass, some irridescent sheets among them. These are quite old and not made anymore. Drapery is very difficult to work with and I use a diamond band saw to cut these as a standard cutter is useless for this type of glass. I like the challange of working with drapery and rippled and exotic types of glass, and then painting, too. (Last update: 9/29/09) 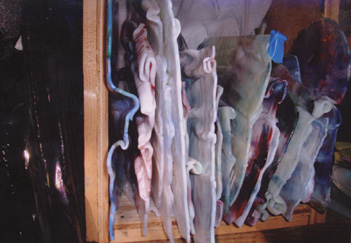 After 18 months without focusing on my glass work, I am ready to finish these two windows. All that remains is the painting, and then soldering them together.