Some months ago, back in June, I was studying with Raphael Schnepf in Portland and attending the G.A.S. convention. One evening I met the infamous Peter McGrain at Uroboros. There, someone handed me a little card that advertised his workshops, but my schedule didn't allow for me to attend. However, in September something in my schedule changed and a nice label sale took place, so I called Peter and said I would like to study with him for a week, one-on-one. We scheduled that training for October 26th through Halloween! One thing that caught my attention was the angel on Peter's card. Since my focus is on painting both portraiture and the feminine form on glass, I wanted to learn about his painting techniques, as well as about fusing, paint-technologies, and other things. Little did I know what I was in for... When he says "intensive," he means it! 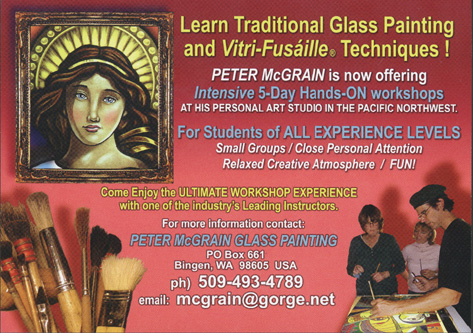 The first morning, Sunday, I met Peter, he was playing the accordian in the "lobby" of his studio. He did this every morning. We started at 9:00 daily, and sometimes went overtime, firing our pieces later in the day. We started my "training" with some slides of work he wanted me to see as a primer for what was to come. Then, I pulled out a binder of my work for the past four years, and we reviewed that. He said, "you strike me as the kind of guy who can handle a little professional criticism of his work..." Whereafter, we spent several hours critiquing the problems with my "early" work, as well as his own earlier pieces! We weren't painting yet, but I found the honesty, skill and undeniable talent, along with his clear candor and experience to be just as helpful as if we had been painting. It was revealing to hear such a successful artist, critique his own mistakes over his thirty-year career, and then equate what he saw "wrong" with my efforts of four years. I walked away with a clearly new attitude and understanding of what changes I should consider in my design and execution of glass work in the future. It was well worth the day we spent.

Accordingly, I took copious notes all week, about 40 pages and about 75-80 photographs of every step of our work on all the pieces we did. Now I need to preface this report with one IMPORTANT point, Peter uses gas powered flash kilns, as well as electric ones. Using a flash kiln, means you can do 4-5 firings per day, or, one firing a day on 4-5 pieces (or even 2,3, or 4 pieces at a time!) This is important, because as a result of this available equipment, we "hammered" on five pieces EACH, in four days (actually 9 pieces between us). We both did the same pieces, his version, my version. Work on one piece, throw it in the kiln, cook it, then head upstairs for the next matte on the next piece, while the first one(s) cooled. Truthfully, it was exhausting, exhilerating, demanding, creative, stressful, expensive, and I could NOT have been happier when it was all over!!! And the full impact of the experience would not hit me for about three more weeks.

On monday, the first project we painted, is a classic McGrain favorite for learning the basics. It is a "standard" design of a woman's face, using black tracing lines, to be followed by a matte later. While we were at it, we started the work on his "angel" piece from his postcard, too. I wanted to learn THAT specific skill, so we worked on both. This looks simple at first, BUT, you better take notes, lots of notes, two yellow-pads and two pens, because Peter dispenses tons (literally) of information as you go..., about style, technique, paint, brushes, safety, lighting, other people in the glass world, glass history, glass-shop tools, how to promote yourself, and a dozen other things. "I have a lot to teach you in the few days we have together," he said. He wasn't kidding. Take LOTS of notes!!!

Then, he said, "by the way, we are going to do a couple Vitri-Fusaille® (vit-tree fuse-sigh) pieces this week, so we better start them right now." Instead of describing the whole technique, which you can learn from Peter and/or his DVD's, we started cutting pieces of System 96 fusable glass, along the lines of two designs: one "standard" of a pear, and another "female form" piece which I requested. We cut and laid out and fired (fused) the pieces, and next morning, here is what we (I) had. Remember, all week (four days), we did the same five pieces, both with slightly different results. On my Tropical Girl, we put a small piece of red where her lips are, and it melted out wider than we thought, so it made her lips look like they were puckered. So, I changed my design to make the best of that.

On the second day, Tuesday, we focused on "matting" the paint on each piece, then removing and "working" parts of it, to create shadows and shading and to raise highlights in the artwork. We also started a portrait of my wife, which turned out to be "good practice for both of us" as he put it. So, by the second day of painting, we each had four pieces going at one time, and doing several firings a day. No time for lunch, just keep working. The progress was worth the effort. In the photos, Peter's tropical girl has open eyes, and his angel has a necklace. His portrait of Gini is slightly smaller than mine.

By the third day, we had several matte layers painted, edited and fired, eight of which are seen in the right-hand photo. It is amazing to see the "illusion" of three-dimensionality coming out of flat glass. But, with each layer of paint and the myriad tools and brushes and techniques we used, the depth of the images really increased dramatically. I think we actually worked for about 46 hours in four days, either painting or firing, or both! And, each piece was done in different ways, with different colors being applied in different sequences. Usually Peter demonstrated, and I followed. Other times we work simultaneously on our respective pieces, on our respective light tables. I had to remember to keep taking notes and grabbing the camera, as we conversed through dust masks and glasses, over brushes and psintings. I found my way back to my hotel at night, exhausted and my head swimming with information.

Finally, after four days of effort, we both had four beautiful artworks (I had five, including the pear I didn't finish.). Here is how my main four pieces turned out. All the painting was done with only 4-5 basic traditional glass stainer's colors, and the yellow in the first two was acheived with silver stain. The colors in the tropical girl are all from the colored base glass, with just black and brown mattes worked later to add the shading and depth. I look back now on how remarkable a week it was. When I got home, it took several days to get all my notes into the computer and organize the photos, from which I made a shop manual for myself on how all this was done. I also have all of Peter's DVDs and added notes from all of them, as well. The timliness of this training was remarkable, too, because while I was there, I received a phone call for my second commission (a paying one), to paint a 16"x20" face of Jesus for another Sacramento area church. (More about that in a minute.) These pieces are all roughly 8" square, which is a good size for the kiln, so you can fire several pieces at a time..., and for many other reasons. 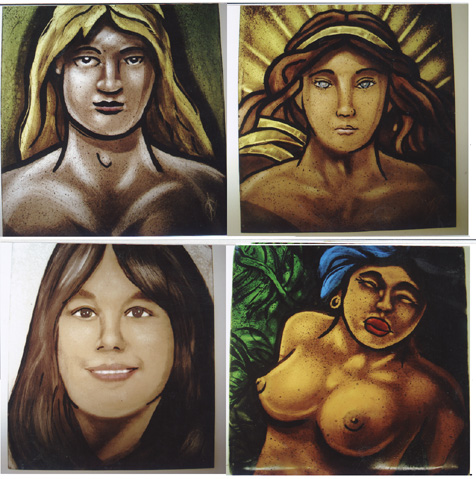 To summerize my experience with Pete, I cannot reccomend highly enough studying with him, whether in a class-setting, or one-on-one (the latter being much more expensive). He is an amazing talent, a modern master. He is really a fun person to be around, and an excellent teacher, artist, and has a world-class grasp of all the fields he works in. Anyone who wants to be a serious glass painter, must get his books, videos and afford training with him.

On another page, I will discuss briefly, the Vitri-Fusaille® aspects of what we did in his studio. I plan to pursue this a LOT in the future, along with my other stained glass, painting on glass and fusing work and commissions.

Next, however, the second half of my trip to Oregon, which was my third visit and training session with Raphael Schnepf!