July 20, 2008: Today I started a new pair of identical windows, called "Elegance" By British art-nouveau artist Mary Golay (1869-1944), an English illustrator who worked mostly with flowers and birds. I found a poster of this in a junk shop in Reno earlier this year, and thought it would be a great window. It will require a great deal of painting on glass, which is one reason I chose it. It may also require some fusing of glass to make some of the flowers three-dimensional, and might even require some drapery glass and other three-D elements. The poster is about 10" x 36", so I blew it up to 17" wide, but am shortening the piece to make it more square. One key element is the Nouveau-style pattern in the background, which, as it happens, is available on a clear architectural glass called "ribbons." I may take some liberties with the design, to better translate it into glass. Shown next to the poster art, is a preliminary trace-line and airbrush matte I did about a month ago. However, this test was done on clear, float glass, and using black trace lines. The next airbrushed versions will be without black trace lines, and on skin-colored Bullseye glass.

I started cutting pieces on July 20th or so, and have had 11 days to put some hours in. By August 26th, I had all the pieces cut for the two identical windows. Here is one of them at this point, pre-taping and pre-painting. You can just see the cartoon through the skin-toned glass and where the painting is going to be, with the light on behind it (transmitted light). Both windows are nearly identical twins and are 17.5" wide by 34.5" tall. 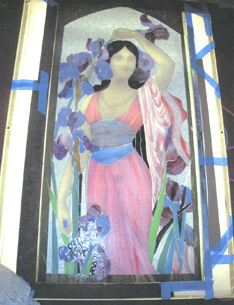 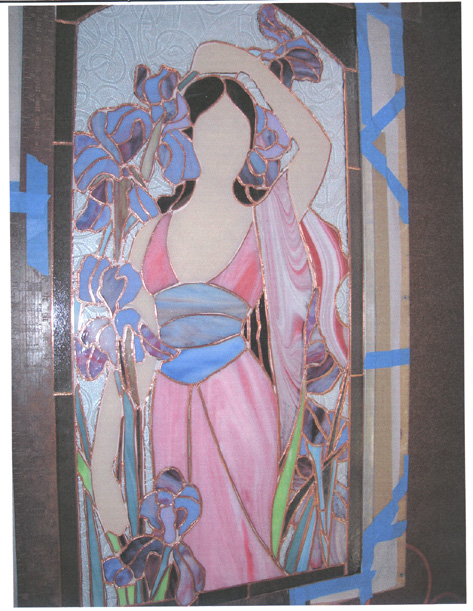 Once both windows had all the pieces cut, there were a lot of small, barely noticeable pieces that contributed to the continuity of the image, like the stalks leading into and out of her hands, which have to be painted in, yet match the glass, too. Putting all the foil on, also showed the "rhythm" and grain of the glass and the flowing elements of the layout, and some pieces had to be discarded and other, better choices, made to replace them (on both windows equally). Here is the reflected light picture of one of them. There is no foil on the skin-tone pieces, since they have still to be painted and fired before taping. At this point I have about 70 hours into these so far, about 35 hours each.

12/08: During the past couple months, several things came up which delayed my finishing these two windows, including my training in the Northwest with Peter and Raphael. The face, torso and arms for both windows had yet to be painted. But, once I returned from Oregon in November, after studying, there were the "body parts" sitting in a tray. So, I painted and fired them and finally installed them into the windows and soldered them into completion. 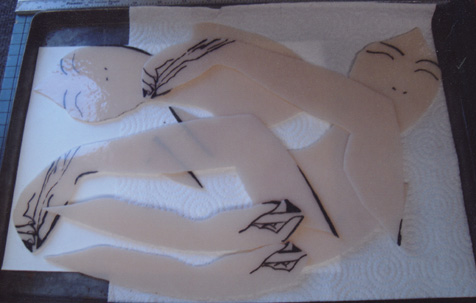 Here is how they turned out... The facial and arm, or "torso" pieces, looked like this just before several further layers and firings of painting,, as compared to the original art-work. Here is a close-up of the original, and below are the two torso pieces installed in the two windows. The next step is to create the jewelry she is wearing. Which, oddly enough, I found one day at a garage sale. There was a baggie with a pair of ornate gold earrings and seven gold necklaces for... $1.00. I re-assembled just a small part of these into the two sets of identical jewelry and installed them on tiny copper-wire loops soldered into the leading (which are removable if you don't like them!) 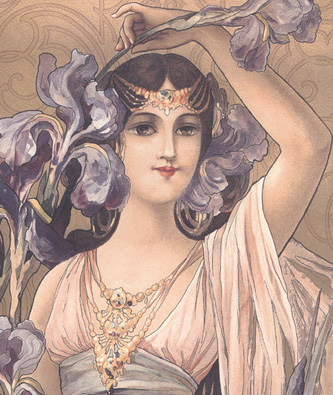 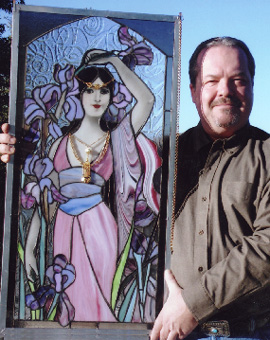 Here is one of the two, featuring the jewelry. 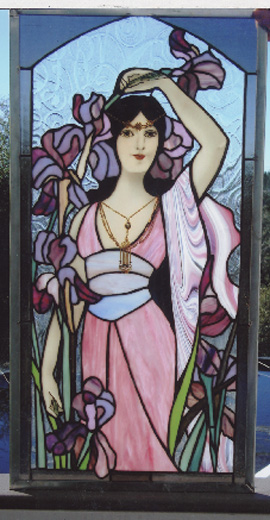 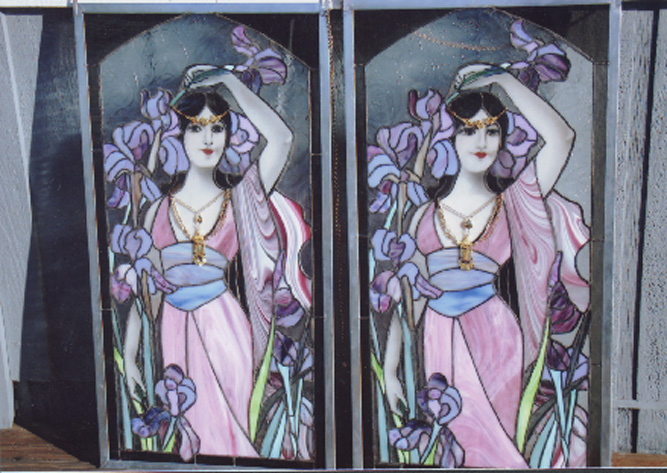 So, now it's on to the next phase of working with the fused designs or "Vitri-Fusaille®" work on subsequent pages.